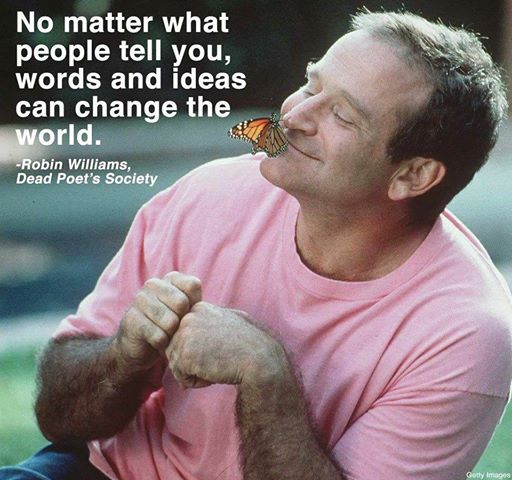 My Encounter with the belly laugh Buddha ~

Hello friends. I know that the world has been rocked this past week with the news of the loss of beloved actor and funnyman Robin Williams. I know I was, shaken right down to the core. On Monday before I heard the news I was having an odd day. It was my day off but I wasn’t enjoying it as I normally would and felt what I’ve often called a “disturbance in the force,” which is annoying especially when I have no idea what it is. We had recently celebrated his Birthday at the Cosmic Weather page and I discovered also that he was a triple water sign (Sun in Cancer, Moon in Pisces, Scorpio ascendant,) which would be challenging chart energies to carry in many ways; but also gave him the depth, humor and realism to all of his performances that was his unique signature, especially in his dramatic roles.

When I verified the news was correct and not another weird celebrity hoax, I felt deep a profound sorrow and sadness for several hours. I was surprised at how deeply I took this news. It was like a member of my own family had passed and it felt devastating. I decided to be pro-active and write post on my Facebook page inviting my community there to pray and send light to him and his loved ones. I could have never expected what happened next. I will include the actual post that I shared on Facebook here below.

Hello friends. I normally wouldn’t share information such as this in such a public forum, but this time I am guided to as I feel it will help the deep grief over today’s loss of Robin Williams. As a note, I am not a traditional medium in the sense that other than my own Guides, people who have recently passed over tend to talk to me on their terms, and not on mine.

Tonight I had an extraordinary experience. As I sat to pray, meditate and thank Robin Williams he came to me as a beautiful ball of golden light, moving very fast before it finally stopped before my mind’s eye. I could see what a HUGE energy he is/was in Spirit and I was told that like many other great performers he is a great Bodhisattva, (one who has agreed to carry these difficult things and play a role in service to humanity.) It was so definitely him as laughter was involved. I am still deeply moved and emotional from this experience. I just wanted to share it with you all. Thank you.

In the Tibetan tradition, a human being has three days before they truly cross more fully into deeper spiritual realms. From my experience, in this window it has been easier for me to communicate with those who have passed. I feel there are many other people who will receive messages from him in the next two days.

This experience was deeply profound at the time and it still is. I’ve been rather “in the closet” about my mediumship abilities for many years now. As an Empath, there is an aspect of that gift that can be problematic emotionally, so I have decided to not persue it but just allow it to unfold as needed and/or necessary. As I mentioned here above, the times I have communciated with people who have transitioned, other than a few cases, they have mostly been family members and other people that I actually knew. One of the things that I’ve found most extraordinary about my visit with him, is how many people have had similar encounters which verifies what I received in my initial encounter with his spirit. I’ve talked to three people on my friends list alone and only one of them identifies as a professional medium. His messages to us all have been similar and have brought the gift of greater awareness on some difficult societal taboos around addiction, depression and suicide.

Edgar Cayce said in that in these times (Neptune in Pisces,) will be a time when many people awaken both spiritually and intuitively. It’s been fascinating and powerful to see just how deeply Robin’s passing has affected them, and already the gifts it has brought to the table.

There were so many teachings given to me in this experience, and many of them correlate so beautifully with the work I have been doing with the Akashic Wisdom Keepers since 2007. I was clearly shown Robin in his higher self and multidimensional/buddhic form, which was beautiful, amazing (and funny!) beyond words. I also was shown the part of him who was a personality/separate self too and the implications of that. I had the realization that while we have all heard stories of people who have ascended to high realms upon their passing, there hasn’t been one that I know of who was a hugely popular international figure, as recognizable worldwide as he was.

Our great-hearted friend will be back as the rain, as the cry of a Raven as the wind. He, you and I have never for one moment not been a part of all it. But we would be doing his life and memory a dis-service if we did not extract some wisdom from his choice, which, if we ponder deeply enough, will turn out to be his last gift. He would beg us to pay attention if he could. – Robin’s friend, actor and Zen Priest Peter Coyote

I know that while his family and loved ones are strong souls, they will be needing ongoing support from us in the global community. I have been sending them positive thoughts and love daily. I also have a feeling that since even folks that have never met him personally are in contact, that he definitely will be in contact with them as well. His energies are so big, free and radiant. Another message that me and several others received from him is that he is definitely not done sharing his light, wisdom and humor with us. He will just be doing it in a different form now.

May we receive his death, just as we received the gifts of his life, as a ruthless invitation: to live fully while we can, with bold brilliance and laughter and to ask for help when we need to, to be transparent in our humanness, our darkness, as well as the immense generosity and luminosity of our hearts. – Jesua Love

I imagine that we will all be deeply affected by his passing, and for quite some time. It is as if the collective heart chakra has been opened just a little bit wider from this experience. It will be up to us to sustain it and keep the lightness, joy and laughter flowing. Somehow I feel that that is just what he would want to remain as his legacy.